Science, you allow non-winged animals to fly and me to type this post. And you apparently allow salt to reanimate dead animals, turning squid and frogs into dancing zombies (thankfully, they're of a variety that you can eat, rather than be eaten by).

Yes, the squid is actually dead. And yes, it comes from Japan, home of some of the weirder food preparations known to man (I'm Chinese, and we eat everything - and even I think they have a crazy streak). Some Reddit commenters have been debating what specific process causes the "dancing" reaction:

Commenter who says he's a chemical-biological engineer and physicist:

This is due to the salt in the soy sauce. The same thing would happen if you poured salt grains on the squid. It doesn't "activate the neurons." Sodium potassium pumps create an action potential... To clarify, sodium potassium pumps maintain the ion gradient across the membrane in a living organism. In this case, however, the ion gradient does not need to be maintained. The gradient is created upon addition of the soy sauce which adds sodium ions on the outside of the membrane. Naturally, these want to diffuse across the membrane to try to reach a state of equilibrium between the inner and outer sections of the membrane. So, this has less to do with the pumps than it does with a concentration driven gradient of sodium ions from the outside to the inside.

Commenter who says he's an electrophysiologist:

The Na/K pump does not create an action potential, but it does create the electrochemical gradient that makes an action potential possible. The high sodium content of the soy sauce briefly increases the extracellular concentration of sodium which depolarizes the squid neurons, generating action potentials... It was freshly killed, the electrochemical gradient would be maintained for several hours after death. In fact, the Na/K pump will keep working after death for several hours until anoxia kicks in. Even so, the laws that govern the generation of action potentials is still maintained even in anoxic tissue. The fact that the squid is dead will not suddenly allow the hyperpolarization produced by the electrogenic Na/K pump to cause a depolarization.

This slightly less disturbing video illustrates the same mechanisms at work, this time in three frogs. Or more accurately, three half frogs.

I feel the need to close with an image from my favorite webcomic's store: 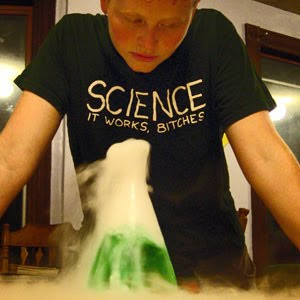 That says it all.
Email Post
Labels: geek science