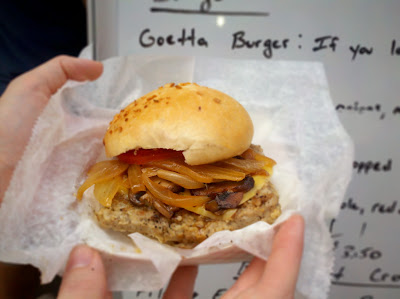 One of my favorite things about traveling is getting the opportunity to explore regional cuisine. And something fun that few people seem to realize is that you don't have to go far to experience local specialties - I live in Chicago, and driving a few hours in the Midwest brings pasties in Northern Michigan, walleye near Lake Erie, and goetta in Cincinnati. Goetta. I'd visited Cincinnati before while touring and was then introduced to the local style of chili (Skyline Chili makes a popular example), but I'd never heard of goetta. Thankfully, last weekend rectified this grave omission.

You probably won't find goetta anywhere outside of Northern Kentucky and the greater Cincinnati area - the dish likely has German-American origins, though some theories also posit that it has roots as a haggis substitute, brought to Ohio via Scots-Irish migrants by way of Kentucky. (Got that?) The Germans love their sausage, and goetta would make some sense as an outgrowth of that tradition: it's essentially a sausage made from pork (or pork and beef), spices, onions, and steel-cut oats. That last ingredient is especially important: goetta must be made from steel-cut (pinhead) oats, not your typical garden-variety oats found in the supermarket aisle. It's not salty, and it's usually served in patty form from the sliced sausage.

Cincinnati loves its goetta - there are entire festivals dedicated to the stuff. Imagine goetta pizza, goetta cheddar cheese, goetta jambalaya - so it wasn't surprising that a stall at Findlay Market featured goetta burgers. No matter how skeptical you might be about oats and pork sausage - I couldn't imagine what this combination would taste like, especially on a hamburger bun - given the opportunity, you need to try it. It's surprisingly delicious, and I'm already wishing I could go back for more.