“Singapore food is an attitude that has evolved over decades and even centuries. What does it taste like? It taste like an attitude.” - Seetoh 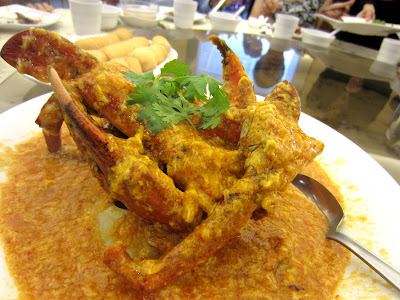 No discussion of Singaporean food would be complete without mentioning chilli crab, one of the national dishes of Singapore (the other one is Hainanese chicken rice). Although it sounds spicy, it's actually quite mild. A large crab (usually a mud crab) is floured and fried in oil, then cooked in a red sauce that's a bit sweet and sour - the sauce is primarily made of eggs, chilies, garlic, sugar, and the most important ingredient, ketchup or tomato paste. (Surprise! Ketchup actually finds its way into a number of Singaporean dishes.) The dish is typically served with buns for mopping up of all that delicious sauce.

Chilli crab was invented in 1950 by Cher Yam Tian, who, legend has it, normally steamed the crabs her husband caught and brought home. She cooked the first iteration of the dish we now know and love because he was tired of the same old steamed crab and wanted something different one day. Voila! Bottled tomato sauce - and then bottled chilli sauce - was added to stir-fried crabs, friends loved the dish, and eventually Cher went from cooking chilli crab in her kitchen to selling it from a pushcart. Then a stall on Upper East Coast Road. Then, 15 years after creating her initial recipe, she opened the highly successful Palm Beach restaurant. She sold the restaurant in 1984, but her son Roland still owns and operates Roland's Restaurant, where he makes chilli crab from the same recipe that his mother did.

However, the version of chilli crab most popular in Singapore was created by Hooi Kok Wai of Dragon Phoenix restaurant; he modified Cher's recipe in the 1960s to include eggs, vinegar, sambal, lemon juice, and tomato paste. The additional ingredients make the sauce richer and more substantial.

If you haven't guessed, chilli crab is a source of national pride. A few years ago, Malaysian Tourism Minister Ng Yen Yen claimed the dish was, in fact, Malaysian, hijacked by Singapore. Few things upset Singaporeans more than infringing upon their food, and the figurative knives came out. Of course, Malaysia has been rather sore ever since kicking Singapore to the curb (originally, Singapore was supposed to be part of the same nation) and finding itself bypassed economically. And, I would add, gastronomically as well.*

*Admittedly, I'm rather biased about the whole thing.