It's difficult to find a more perfect dessert than ice cream. While it's fun to savor expensive, elaborate chocolate concoctions (and believe me, I do), I'm just as happy with a scoop of good, high-quality ice cream or gelato. And as an additional bonus, that scoop (or two or three) from the local creamery is usually cheaper than the pastry chef's latest offering. So it's no surprise that I look forward to the Chicago Ice Cream and Gelato Festival, which offers tastings from makers from all over the Midwest, every year.

The festival is in its third year, its first in Little Italy. And this time, I wasn't just sampling ice cream - I served as a volunteer. I spent most of the night stationed at the ice cream sandwich booth, which featured chocolate chip cookies from Tate's Bake Shop. I took one bite and could tell that these cookies didn't contain unpronounceable preservatives. They taste homemade because the ingredients list is one that could come straight out of any kitchen. And hands down, they're some of the best cookies I've ever had out of a package. 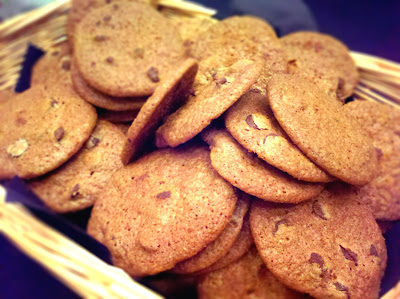 Upstairs on the rooftop deck, festival participants could enjoy beer, cocktails, grilled chicken tacos with spicy mango salsa, gelato from Canady le Chocolatier, and a fantastic view of the Chicago skyline. Downstairs in the ballroom, I was excited to see Zingerman's Creamery (pistachio gelato), which reminded me of my years in Ann Arbor as a student at the University of Michigan. I also spent some time talking to the guys from Mitchell's Soda Shop (banana chocolate chip, vanilla, and chocolate chip), which hails from the Chicago area, and sampled treats from vendors including Graeter's of Ohio, Hudsonville Ice Cream (Grand Rapids, Mich.), and Intelligensia Coffee (Chicago).

But the standout creamery was Columbus-based Jeni's Splendid Ice Creams, with an incredibly smooth dark chocolate. Wow. Now I'm upset that her store was closed the last time I was in Columbus and had no idea what I was missing. Next time, that's the first place I'm visiting. Jeni Britton Bauer also did an ice cream-making demonstration - unfortunately, I didn't catch much of it since I was working - and passed around samples afterward. She made a batch of fennel pollen ice cream, which I didn't think sounded terribly appetizing, but which turned out to be surprisingly delicious. This woman clearly knows her ice cream. Here's hoping that she comes back next year!
Email Post
Labels: Chicago dessert festivals ice cream