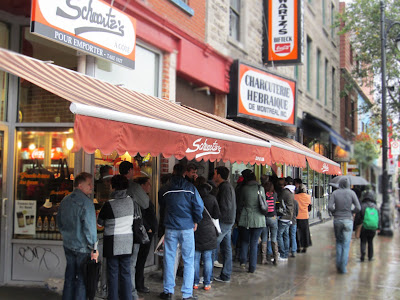 According to the locals I talked to, Montreal has a trifecta of regional foods: bagels, poutine, and smoked meat. (Interestingly, two of the three are Jewish in origin - there's a large Jewish community here.) So after my morning bagel adventure, I had to try smoked meat for lunch. Schwartz's has been a Montreal staple for 80 years, and it's reputed to be the best example of the local foodstuff. 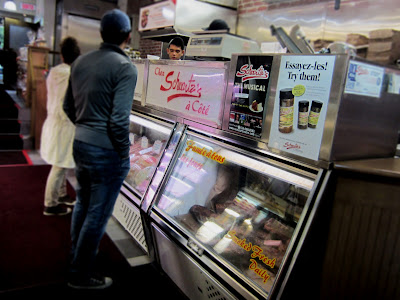 Even though the signage is in French, Schwartz's could be transplanted to New York with few changes. Smoked meat (viande fumée) is actually quite similar to pastrami: it's beef brisket seasoned with spices and peppercorns found in kosher delicatessens. The Schwartz version, which was brought to Montreal by a Jewish Romanian immigrant named Reuben, is marinated for 10 days and smoked on a daily basis. It's more flavorful, though less peppery, than its American cousin - and while it's not the best looking of sandwiches, it is delicious. When ordering smoked meat, ask for a sandwich viande fumée, which will come with mustard and no other toppings (distractions from an extremely substantial portion of the main attraction). 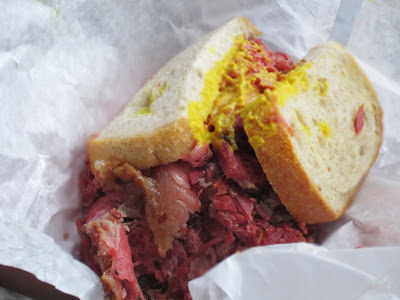