The Evolution of Coffee 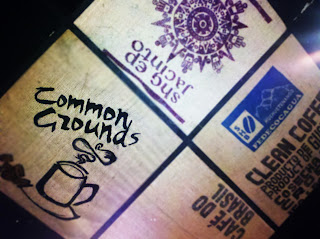 I suspect you could organize a cross-country tour around the idea of visiting coffee shops called "Common Grounds" or its derivations ("Uncommon Ground," etc.). A quick Google search for the term comes up with over 6 million results for cafes in Gainesville, Fla., Lexington, Ky., Waco, Texas, Fayetteville, Ark., Denver, Colo., and my favorite city, Chicago, Ill. And that's just on the first page.

So it wasn't entirely surprising that when I searched Yelp on Saturday afternoon, I was directed to Common Grounds in Mattoon, Ill. We were in the middle of our road trip back from an arts conference in Jackson, Miss. and in need of both caffeine and food. Fortunately, the internet delivered. 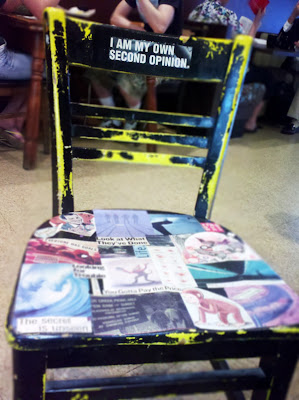 It's a cute place, and they take their coffee seriously. The barista said that they roast their own beans, and the walls were adorned with painted chalkboard signs with some fun coffee facts and history. I've written them out underneath the signs to make them easier to read. 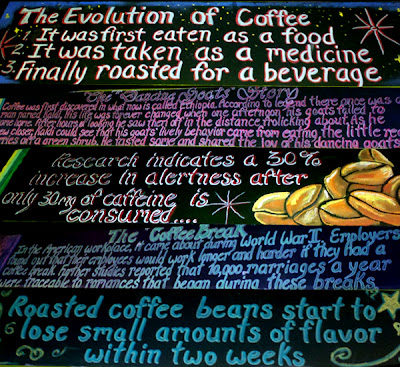 In the American workplace, it came about during World War II. Employers found out that their employees would work longer and harder if they had a coffee break. Further studies reported that 10,000 marriages a year were traceable to romances that began during these breaks.

Coffee was first discovered in what now is called Ethiopia. According to legend there once was a man named Kaldi. His life was forever changed when one afternoon his goats failed to come home. After hours of looking he saw them off in the distance frolicking about. As he drew closer, Kaldi could see that his goats' lively behavior came from eating the little red berries of a green shrub. He tasted some and shared the joy of his dancing goats.

Apparently the cafe is also the home of a local church on Saturday nights. 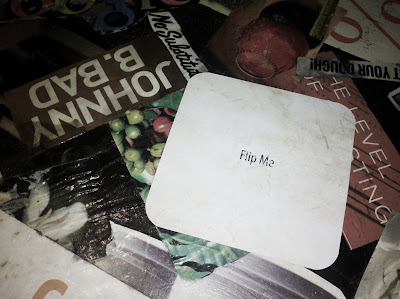 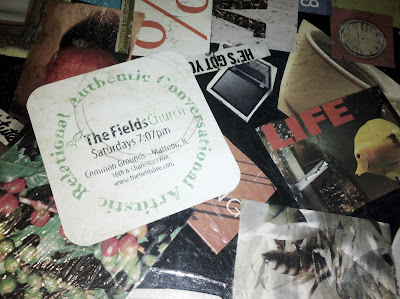 All in all, it was worth the visit. We loaded up on smoothies, sandwiches, cookies, cinnamon rolls, and coffee, and arrived in Chicago a few hours later. But not until we'd visited one of the more decrepit Dairy Queens in existence. Stay tuned for those photos tomorrow.